A country as beloved by Americans as Italy means there are a lot of tourists here.
And while there’s technically nothing wrong with lots of tourists, the general consensus would be that high ratios of tourists greatly diminish the potential for experiencing a country as we dream of, stepping out of the predictability of our lives into a temporary, magical world where everything is different and fascinating. I’ll never forget the American woman who unknowingly cut into all of our “magical” experiences when she loudly announced at a restaurant in Venice, “Hey, y’all got somethin’ ta eat ’round here?”

I can’t tell you how many times I have been to Florence or Venice or Cinque Terre and felt sorry for some of the tourists. Now, don’t get me wrong – a trip to Florence is amazing no matter what. But an Italian vacation hitting only the most famous cities means never truly touching the spirit of the Italian lifestyle, which, technically, is what brings us here to begin with, right? Instead, I recommend with gusto – even if your next vacation outside of your country is short – scheduling in some time in a city off the beaten path, no matter how small and insignificant that city may seem. These are the places that incubate those travelling moments you’ll never forget.

Take Treviso for instance. With a mere 20 minute time investment on a train leaving from Venice every half hour or so, you’ll be so far from the crowds of tourists that you’ll think your train crossed you into some sort of other dimension instead of just transporting you 25 miles away. Impeccably maintained with remains of frescos adorning many buildings, and lazy art-filled canals cutting through the center of town, dotted by chic cafes and high quality osterias, surprisingly even many other Italians don’t give this beautiful city its due credit. 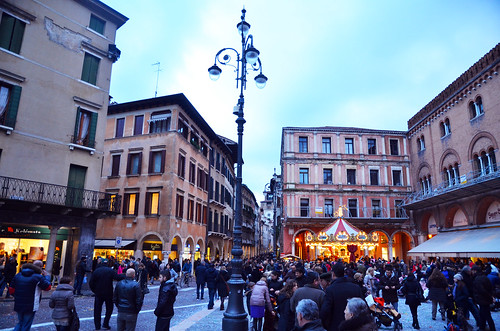 My conversation announcing my trip to Treviso to my Bolognese English students went something like this:

“Because I want to go someplace new!”

“There’s nothing in Treviso. Don’t go there.”

But still itching to get out of Bologna and not wanting to spend a lot of money, I went anyway, inspired by the advice I found in the blog, Around and About Treviso. But because of my friends’ bad advice, I was so disillusioned about Treviso’s potential before I even arrived that I only scheduled about five hours of time to explore the city, thinking that would be more than enough time. Fortunately, I was quite mistaken.

Instead, what I found in Treviso was an afternoon of nothing but pleasure. The center of the relaxed city is mostly closed to traffic. I let out a sigh of relief as I slowed my normal pace to stroll Treviso’s clean streets under the mini porticos, enjoying the beautiful architectural touches of the thoughtfully updated medieval buildings.

And most of my day continued like that. I followed all the instructions on the blog except taking advantage of the nature trail because I ran out of time. I went by the three beautiful churches. I had the best tiramisu I’ve ever eaten at Antica Pasticceria Nascimben, which is only fitting, being that Treviso is considered to be the home of tiramisu.

I checked out the exhibit at Ca’ dei Carraresi, beautifully positioned with picture windows along one of the main canals. But the most important “attraction” in Treviso is that the city shines so much with the beauty of the unmistakable care that it has been given over the years, and I was content just to spend the day walking the streets and people watching. No travel guide would ever put this on the list of “must-dos” in a city, but in Treviso there’s nothing better than an afternoon of petting happy dogs (and children dressed as dogs!) on walks with their families, resting a moment on a park bench to enjoy an outdoor sculpture bathed in nature,or buying a two euro glass of local prosecco to sit and enjoy the beautiful canal view for just a bit longer.

I hope to go back soon, this time for a weekend. And in the meantime Treviso stands tall and proud among my memories of my Italian adventures. In my opinion, we spend too much time focusing on seeing “the sights.” We are determined to have the best vacations, and I guess that’s the simplest strategy to achieve this. But to have the opportunity to be a quiet guest in a foreign, beautiful world and just to watch, and to learn, those people’s lives…that, I think, is the best. I hope you can someday make it to Treviso, and if not, that you find your own Treviso soon. There’s probably one closer than you think.